Hardwood flooring may not be something you may be used to seeing as “trendy”. A theme for one year is often pretty much the same as the year before and the year after, right?

As it turns out, that’s not the case. Hardwood, in particular, continues to grow in popularity year after year, as cheaper quality flooring of various different types continues to degrade, forcing their owners to start looking for replacement options. More often than not, they will turn to hardwood flooring.

In this article, we will discuss the various leading trends for the year 2021 that people went with.

For a long time, hardwood flooring had fallen out of style as people went with cheaper alternatives, such as notoriously cheap laminate wood and plastic tiles. It may have seemed like a good idea at the time to the buyer, with a rich number of ways to customize these that far exceed what wood is capable of, and the incredibly simple installation, but it came with a hidden cost.

As the years went by, the flooring would take the same wear and tear that any other type would, but much less well. In the case of the laminate flooring, made of nothing more than various cheap materials tightly pressed together, the beautiful design that they had printed onto it would often completely wear down and come off. Those fancy zebra stripes don’t look quite as good when they’re faded, peeling up, and covered in grime.

Water damage would also cause it to badly warp and even snap, with no real repair options besides tearing it all up and replacing it. These days, buyers have begun to rightly conclude that it isn’t worth all the hassle to continually replace it every decade or so. 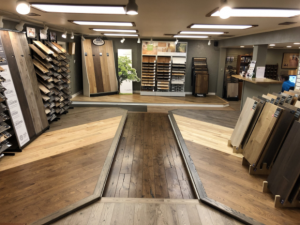 The first big trendsetter continues to be one of the newest ones. Engineered wood has a big appeal for many reasons. Unlike standard wood, it doesn’t have a tendency to warp, split, or crack over time.

Not only is it cheaper than using real wooden planks, it often exceeds the durability of unmodified wood. While it’s made of hardwood on the outside, it uses a special trick to increase the durability, where the wood is hydraulically pressed together under intense pressure, with a layer of veneer added afterward to seal the deal. This layer is built on top of a base of plywood going in opposing directions. Thanks to all this, when the wood does begin to show imperfections and wear down, you can simply sand it down to a new layer, just like regular planks. All this engineering can produce a floor that can be up to twice as strong as natural wood.

More than just cheaper, more durable, or environmentally friendly, engineered hardwood is also much, much easier to care for and maintain than real hardwood. While some do feel that they take away the “warmth” of wood, its benefits tend to outweigh that, at least for most who choose to use engineered hardwood.

Throughout 2021, the options for the different finishes, colors, and materials continued to increase. It continues to see increased use in parts of the house that would normally be forced to use a different material, particularly in kitchens and in bathrooms where moisture damage was typically a concern. Going into 2022, expect to see this trend continue. 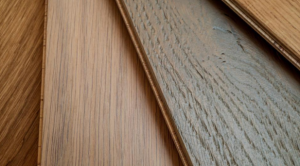 As of late, this wood has become harder to find through traditional means, so the producers have started using a clever trick, where they use the wood from just about any source they can find. The most popular source these days is to take it from old wine barrels that have fallen into disuse. Don’t worry, your floor won’t be smelling like wine!

This wood tells a story that can’t be easily replicated through artificial means. Each plank is potentially completely different from the other, ensuring that no two rooms with it employed appear the same. Not only are you saving the environment by using them, but you’re also giving your house a look that nobody can hope to match. 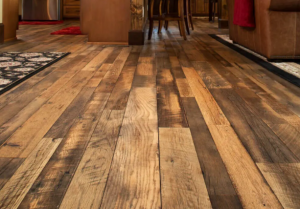 There was a period of time when it was just expected that the material used to build your home would come from the same country you’re building it in. As the world became more interconnected and international trade became even cheaper than producing at home, that began to fall away.

Now, there are a growing number of people who go out of their way to buy flooring that they know was created right here in this country. The reasons people would want this are numerous, but among the most popular are there’s a certain expectation of quality coming from American-made goods that you wouldn’t necessarily expect from foreign providers. You also get a sense that you’re supporting your local businesses, which is quickly becoming a big trend of its own.

There is no reason to suggest this trend will be slowing anytime soon. As Americans continue to rediscover their love for their own backyard, we expect this trend to continue to explode in popularity. 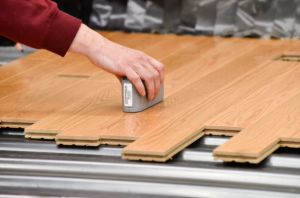 2021 was a great year for trends. The pandemic forced many people to be in their homes far more than they had ever been before, which forced them to really take a good look at their surroundings. As a result, we’ve seen more radical changes in the past couple of years than we normally do in a full decade. As we begin to open up again, you can expect that urge for change in the environment to fade somewhat, but the lessons learned aren’t going anywhere anytime soon.